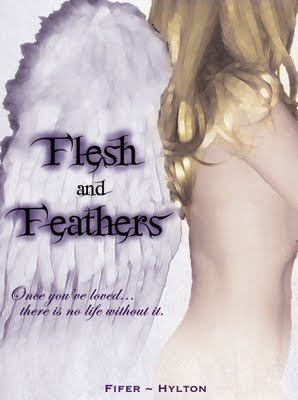 On a cigarette break one afternoon, Danielle and I were sitting in my car. I looked over at her and said, “Don’t laugh, but I started writing a book.” Thankfully, she didn’t laugh. In turn, she said that it was so strange because she had always wanted to write a book too. We had been friends for five years and had no idea that either of us had the same dream. Together we pulled out my pitiful twenty two page manuscript, carefully read it, and then threw it in the trash. It was horrible. The entire thing revolved around a Christmas party. We still laugh about it to this day. However, what came from those twenty two pages was a new, genuine bond between me and my friend. After that, we learned that each of us had strengths in areas the other did not. Descriptions and visuals became my obsession, while Danielle’s detail to the characters and their interactions gave them a life of their own.

Looking at the characters, Azaleigh, is our best friend. She is the person who, no matter what happens, will always be there for you. The more we wrote about her, the more we fell in love with her. She became so real to us, we actually began asking ourselves, “What would Az do,” in our everyday lives. As for the two men in Azaleigh’s life, Kale and Gage, we hope that everyone loves them as much as we did. Danielle and I had to pick a side; I was the Gage fan and Danielle was the Kale fan. We wanted the readers to struggle with who they would choose, because it was surely a struggle for us. Kale was the mysterious, sexy one. While Gage was the confident, outgoing one.

Flesh and Feathers is the first book of our series. We are currently working on Flesh and Flames, book two, and we are already obsessed with the new plot. In this book the reader gets more insight into each of the characters lives; past, present, and future. Things also start to heat up between the characters, hopefully making it harder for the reader to decide who they will root for. Then there is Anna. You will finally get to meet her and learn how truly important she is to the story.

We have been so blessed on this journey with the help of a really great friend. (You know who you are.) Thanks for all the support.

All he did was watch me. Looking at him only made the pain rise to the surface, and for once the true me came out. “I always knew I liked you more than you liked me. You never proved me wrong. I wanted you in every way a person could want someone. All I wanted was you. So I guess I’m the one to blame, for believing that you could feel the same in return.”

I couldn’t look at him another minute. I was crushed and didn’t want to show him how badly, even though I am sure it was a little late for that. I pushed past him and ran out the back door where our cook, Jackson, would normally sneak off to take his smoke breaks. I could feel the tears welling up, weighing heavy on my eyelids and ready to break free at any second. I had to clear my head and didn’t want an audience during my nervous breakdown.

The back door spilled out into an alleyway that ran beside the diner. I stood outside pacing back and forth, trying to calm myself. I wasn’t sure if I wanted to scream and cry or find a baseball bat and start swinging.

I turned when I heard the back door open again. Kale stood a few feet away, trying to keep a safe distance. “Azaleigh, if you would let me explain.”

“Go to hell!” I shouted as I began walking hard steps down the alley that would lead to the city sidewalk.

“Azaleigh!” he shouted, grabbing my arm and spinning me around to face him.

My only reaction was to slap him hard across his face. The loud sound of my hand making contact with his cheek shocked me, but I was too angry to care. “No! You don’t understand! You don’t ever get to touch me again!”

I shrugged harshly out of his grip. Just then, a heavy gust blew, ruffling my hair and blinding me as I turned to walk away, followed by a loud thud. Taking a step forward, I brushed my hair from my face, but then stopped suddenly. A man wearing a white hooded cloak stood in front of me. At first I stopped because I was astonished by what he was wearing, but as I studied him, I noticed the slender sword-like object that he gradually pulled from his side. My body began to tremble with fear.

“Azaleigh, get behind me!” Kale demanded, in a firm voice.

Posted by Rebecca Royce at 1:00 AM

So happy to have you ladies here!

What an awesome story about how you guys started writing! I bet it is really awesome having someone to share that with. My friends are wonderful, but they're not writers, so they kind of do the glazed eye thing when I start talking about how my characters are being pains. They listen, but don't truly get it.

The book sounds great. Wishing you much luck!

Thanks Rebecca! We are very excited to be a part of this blog!

Thanks Abby! It has been great for us to write together. I know what you mean about the "glazed eye." If we start rambling on about plots and characters, all of our other friends just kind of stare at us. They love us and they are great friends their just not on the same planet. Ha ha.

Rebecca had recommended this book a while back and when I picked it up I couldn't put it down. I loved it and I am so happy you guys found each other!

Congrats on everything and good luck with the next one - its already on my list!

Hi Carrie! We are so glad you liked it! We are really excited about the next book and are working hard on it! Thanks so much for your support.

It's wonderful to have true friends in this industry and it sounds like you've found more than one.

The excerpt from Flesh and Feathers is so intriguing. I'm going to have to find myself a copy. :)

Thanks Jessica ;-) We have met some really greats friends. We appreciate them very much! It's been a great experience.

Thanks for sharing how you co-write. It makes sense & I bet it's fun sharing a writing buddy, especially if the friendship bond is already strong. Makes me feel lonely, writing alone in my little shed. No one but me and the dogs. And the chocolate.
Watching an interview of t.v. writers for 'Blackadder' one thing they all agreed on: If someone took something out, that was it. No arguements. No matter how good the original author thought it. So it was really interesting to read about how you guys divided the work. Thanks again for sharing.
Julia Hughes.