I have to admit, Devil’s Due was the book that almost didn’t get written.

The idea for a story about a hero who buys souls for the Devil came to me a while back and floated around in my idea file for a long time before I sat down to start working on it. The concept started with one scene – the hero refusing to buy the heroine’s soul. I saw him clearly, dark-haired with piercing brown eyes that could set a woman’s soul on fire with just one look. The heroine would find him irresistible, and as much as she feared what he was, she’d fall in love with him.

But something just didn’t gel with the early drafts of the story. The rest of the characters fell into place and played their parts just as I’d envisioned, but Alex Quinn never seemed like he fit. The scenes I wrote with him and Ceara didn’t click.

I put the book aside for a long time, and it languished in my own personal slush pile until one day it hit me. I needed to go back to the ‘casting couch’ so to speak and find someone else to play Alex.

I’d made him too stereotypical. The tall, dark and handsome hero, my personal favorite combination, wasn’t exactly right for the part. Alex needed to break the mould. When I recast him as the guy with the boy-next-door good looks, the one nobody would ever suspect as dwelling just on the wrong side of the fine line separating good and evil, the story turned around.

The scenes with Alex and Ceara sizzled now and the rest of the story fell into place over the course of a few weeks of intensive writing.

It’s not easy to fire a hero. They look so forlorn slouching out of my office. I always promise to find a place for them in another book, but you know what they say. The road to hell is paved with good intentions. 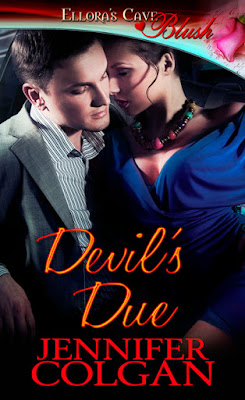 Who would you sell your soul to save?

For Ceara Landon, the answer to that question is easy. She would do anything for her younger brother Kevin, even if saving his life means shattering his dreams.

On first glance it seems the skyrocketing success of Kevin’s band, Pillars of Stone, is a dream come true, but Ceara sees the truth. His increasing drug use will destroy him and ruin any chance he has for lasting happiness.

Ceara traces the source of Kevin’s dubious rise to fame back to night club owner Alexander Quinn. The gorgeous entrepreneur hides a terrible secret. He buys souls for the Devil, and he purchased Kevin’s in exchange for fame and fortune. In desperation, Ceara offers her own soul in exchange for Kevin’s, and for the first time in his lonely existence, Alex risks everything to refuse. He agrees to help Kevin sober up and guide his band to true success, but the price for Ceara is high. She’ll have to bargain with her heart to save her brother along with the man who wants to possess her body as well as her soul.

DEVIL’s DUE is available at Ellora’s Cave

Leave a comment or question for Ms. Colgan and be entered to win a copy of Devil's Due. Winner will be announced tomorrow.
Posted by Annie Nicholas at 12:19 AM

So, is hero #1 still hanging around on your couch waiting for another story? Or is he pretty much ousted like a bad soap opera character.

Oh wait, those do you have a bad way of coming back from the dead!

LOL! I still have hero#1 waiting in the wings. If he behaves ;) he'll get his own book one day.

Does this story have the potential to be a series and perhaps have a place for this bad boy? Maybe that's why you see him as a delicious servent of evil :D

Hi Stephanie! I always have room for delicious servants of evil...LOL! This story isn't exactly part of a series, but it does have some tie in to my un-vampire novel UNCROSS MY HEART [Samhain] and my upcoming INTERVIEW WITH A GARGOYLE [Samhain, October 2011].

Ooo Gargoyles! You can definitely count on me to get that one!!

This sounds like a really good book.I'll have to check it out.
elaing8(at)netscape(dot)net

Thanks, elain8! I hope you enjoy it.

Stepanie! You're the big winner. You should be hearing from Ms. Colgan soon.

Thank you for joining us Jennifer!

Thanks So Much! I can't wait to read it!!