It would be presumptuous of me to assume that readers of paranormal romance know who I am so I’ll take a moment to give you a little background. I’m Lex Valentine and I’m probably best known for writing an erotic paranormal series entitled Tales of the Darkworld. The Tales series has a little something for everyone from M/M to M/F to a ménage a quatre. There’s also vampires, werewolves, demons, various fae, the Magia (the magical race) and dragons. I always have a HEA and really hot sex in my books. I do write other genres, but I think my first love is paranormal simply because it’s what I’ve been writing the longest.

The Tales of the Darkworld first took root in my mind back in the 80’s as the Dark Realms which are now the Five Dark Realms of which the Darkworld is one. I had a story of witches and wizards and mythical creatures who shapeshifted and horses with blue eyes who belonged to mages and had magic in their souls. It was pretty fanciful and it became the basis for the books I write now. This world, these realms, have existed in my head for thirty years. Could be why people say the world building for them is so rich! I’ve been living with this stuff in my head for most of my life!

I wish the Darkworld was real most of the time because I would love to hang out with werewolves and dragons and wizards and vampires. Maybe someday it will be discovered that vampires and other paranormal races have been walking amongst us for centuries. I certainly can believe it.

In my latest venture, I decided to take to heart fan mail I’d received asking for more of characters who have already had their HEA and more of secondary characters whom I’d had no plans for beyond the book(s) they were in. My new series are short stories built around a single sexual act or night of sexual activity. They may or may not have a HEA or HFN. Some of the characters already had their HEA. Others are just having fun before they inevitably meet their mate. Some are about to get their own story.

Cadence O’Connor wants Aiden but doesn’t want him. She’s metaphysically and physically drawn to him. But she fears losing her heart to him. She’s learned that most vampires what nothing to do with a woman who is pretty much an abomination. Being half demon when demons are the vampires’ natural enemy makes her very rare indeed. And she’s tired of other vampires thinking she’s a freak. Aiden’s overtures turn her on, but she won’t ever trust him.

The deep scars of the heroine and the deep-seated sense of possession the hero has for her rock this short story and hopefully carry over to the reader the need to find out what happens to them in their own full-length book. I hope to write Aiden and Cade’s story next year after I finish the 8th book in the series, which oddly enough is number 7. ;)

Below is the blurb and excerpt for Encounters: Blood Play. I hope you enjoy this little taste of my Darkworld. If you’d like to win a copy of Blood Play, leave a comment and I’ll put your name in a hat and pick a winner on Friday night.

Thanks very much to the Paranormal Romantics authors for having me here. I’ve had a great time talking about the Darkworld and my characters and I hope you all have had a good time as well!
Lex
Website
Blog
Series
Blood Play Buy Link 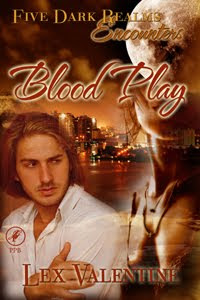 Vampire Aiden Swann has a tough job, infiltrate Paris’s most notorious BDSM club Perdition. While he’s all Alpha, Aiden’s no Dom, yet he finds his time in Perdition no hardship due to a mysterious female vampire. Cadence O’Connor intrigues him and makes him hard as stone. He knows there’s no reason that a pure blood vampire like him couldn’t play with a mixed blood vampire like her, but Cade disagrees. She’s got a chip on her shoulder about her heritage and refuses to see Aiden as a sexual partner. All Aiden needs to do is convince Cade that she’s no abomination and that everything she is, is everything he wants.

“This is a little too cliché even for you,” the dark shadow murmured in a sardonic tone.
“Vampires indulging in blood play?” One brow rose in amusement as he turned to face her.
She slipped from the shadows into the light with a lithe grace he’d rarely seen a woman exhibit. Her short hair gleamed like polished ebony, the silken strands curving around her sculpted cheekbones and jaw line. His cock strained the front of his leather pants, evidence of his rapidly slipping control. He needed a release--hadn’t been with a woman in months--spending all his time protecting Garrick. Now, his body seemed to want to end his celibate streak with Cadence O’Connor, a vampire of mixed heritage known to the patrons of Perdition as Cade. His family would have a fit. Not that he cared what they thought.
“You have to admit that blood play, while naturally tempting, is not very creative play for a vampire,” Cade said as she leaned against the door and peered in through the window that Aiden had been using.
Her husky voice sent a shiver down his spine, and her casual pose caused his blood pressure to rise. He’d always been attracted to petite women, but Cade stood nearly as tall as he did, all long, lean muscles, angles and bold beauty. She was so not his type, and yet she roused him as no other woman had. Her femininity came from an incredible grace and a stark, in your face elegance. She wore her dark hair short. Layered attractively, it framed the imperious face of a goddess. Her body had the honed muscles of an athlete, and she always dressed severely in dark colors. Her clothes often molded tightly to her frame, something his dick always noticed.
Cade turned her head, her gaze meeting his, and Aiden’s breath caught in his throat. She had the most amazing eyes. At first glance they seemed as black as her hair, but upon closer inspection they proved to be a deep, cobalt blue. They also gave him the sense that he stared at a locked treasure chest. Cade gave away nothing with her expression, yet when Aiden gazed into her eyes, his gut reaction was that a wealth of emotion and passion lay locked within her. And he ached to be the one to release them. Too bad she didn’t seem to like him one little bit.

Email ThisBlogThis!Share to TwitterShare to FacebookShare to Pinterest
Labels: http://www.blogger.com/img/blank.gif

I loved this book and cannot wait to see more from Cade and Aiden. There was so much emotion in this fast read. I am eagerly awaiting the next book.

Hi Lex,
This looks like a delicious book.
Dee Brice

Gabrielle - So glad you liked Cade and Aiden. You'll get a bit more of them in Fire Storm (Tales #7) and then they get their own book Quintessence (Tales #7.5). The next Encounters story is about Weylyn Randall who was in Common Ground (Tales #5).

Dee - It's quick and emotional and hot! Which is the point with the Encounters short stories.

Thanks for coming by ladies. I appreciate it!

Dee Brice wins my drawing for a copy of Blood Play! Thanks to everyone who stopped by and to the whole crew at Paranormal Romantics!