Daughter of Lust - For the Love of Evil, Book 1

You know when you read a story that makes you happy the whole way through? Well, I just experienced that with Daughter of Lust by Ann Mayburn. So I had to share! This story is SO HOT...like seriously SMOKIN'! But it had a fantastic plot too! I loved the concept, the action, the steamy scenes, and just about everything thing about it. 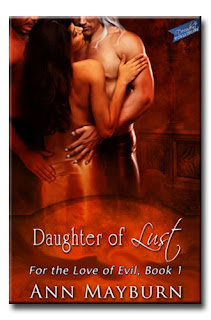 Belal, High Prince of Hell and Keeper of the Deadly Sin Sloth, is expanding his power in the world of the 1800s by trafficking opium. He revels in the results, and as sloth begins to overtake the mortal realm, all of Hell suffers. The balance of power in Hell, as well as the fate of the Universe, will be decided by a half-demon peasant girl.

Natalia Shura, the daughter of Asmodeus, High Prince of Hell and Keeper of the Deadly Sin Lust, is unaware of the nature of her birth. When her demonic side begins to awaken, her world becomes dominated by dark passions and deadly craving, and Natalia believes she is losing her mind. But Natalia's love has been foretold as the only thing that can stop Belal and his allies, and they will do anything to prevent her ascension.

Facing assassins, avenging angels, Hell's deadly politics —and her real father — Natalia must accept the love of more than one man and embrace her demonic heritage as a Princess of Lust. If she doesn't, all that she loves will be destroyed, and Heaven and Hell will plunge into Chaos.
Excerpt:

Natalia stared at her mother, who leaned out the door and called for Mr. Trezent. He strode into the room, dressed from head to toe in royal blue velvet. His long tunic had silver embroidery across the neck and down the front. Silver fox fur lined the collar and brushed against his throat.

The color brought out the deep red in his hair and complemented his broad figure. She had a moment to appreciate his features as he studied her. They were finely formed with high and prominent cheekbones. In the lamplight, his chocolate-brown eyes appeared almost black and they were slightly tilted at the corners. She idly wondered if he had some Tartar blood in his lineage.

Her mother glared at him and shook her finger. “Do not upset her. She’s still recovering.”

Mr. Trezent offered a charming smile, and she simpered at him. Natalia distrusted him even more. How dare he pretend to be a normal man.

Her mother closed the door as she left, and Mr. Trezent turned his face back to her. The charming smile was gone. In its place was cold calculation and hunger. Oddly enough, she found his expression reassuring. At least he wasn’t trying to be someone he was not around her.

Dark and spicy, his cologne and scent filled the air of her small room. She could feel his desire, and in the back of her mind, she knew exactly what he wanted. His lust broke her barriers and awoke her essence; it thirsted for his warmth and passion. Her self-control slipped away, and she felt helpless to stop it.

Ignorant of her internal struggle, he arrogantly ran his eyes over her body, lingering on her hips and breasts.

His full lips softened at the sound of her voice. “To see the little hellcat that tried to slit my throat.”

This is why I love Stacey, no matter how famous she gets she still takes the time to read the work of total newbs like myself and give us encouragement.-kisses- Thanks, babe. ;)

Ugh, I meant thank you very much for posting this excerpt. This book just shot to the top of my To Be Bought list. Especially love the descriptions -- very well done.