Stella (Ex-Libris) The author will be contacting you shortly to deliver your prize.

Thanks to everyone who left a comment. Now you get a chance to do it again. Let's show Ryssa Edwards, author of the books below with the smoking covers, some love. 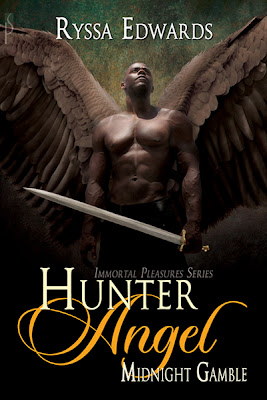 Tell us a little about you.

My name’s Ryssa Edwards. I’m author of the Immortal Pleasures series and the upcoming Dreaming of a Kiss. I live just outside Dallas, where it’s probably over a hundred degrees as you’re reading this. When I’m not writing, I’m either putting together a jigsaw puzzle or reading or chasing down the next sale on scented candles.


What authors inspire you?

I like different authors for their different strengths. I love Hemingway’s short stories. He can pack a lifetime into about . . . five pages. My absolute favorite of his is “The Capital of Madrid”. H. P. Lovecraft writes amazingly creepy short stories. I’ve recently discovered Robert E Howard, the author who created Conan. He also wrote horror stories. Awesome atmosphere. Definitely need to read those by candlelight, with shadows creeping around you. Yummy!

What are your upcoming releases?

I’m so glad you asked! I have four new releases coming up.

Hunter Angel, Midnight Gamble is part III two of my Immortal Pleasures series. It’s the story of the Hunter angel Azriel and Zane, a mortal, falling in love and fighting to stay together. (September 24th)

Dreaming of a Kissing is a novel about Rafe, a college freshman who sets out to find a cure for his mother, and ends up falling in love with Kayne, a Wulf in training to be Alpha Wulf. This book is in final edits and will be coming soon from Decadent Publishing.

Johnny V and the Razor is the story of Johnny V, a driver for a greedy bootlegger and Sloane, “the Razor”, muscle in his brother Nick’s bootlegging operation. They meet and take a chance on love. It’s in final edits, coming soon from Dreamspinner Press.

Azriel moved through the city wrapped in night rhythms of jabbering tourists, glaring neon, and streets clogged with slow traffic. The Renegade was awake. All Azriel had to do was find him and dispatch his screaming headless body. The Council would understand.

His black on black eyes traced the night, looking for the Renegade’s trail. Azriel had tracked him to the city, then lost him. The crowds made a meaty hunting ground for a newly escaped Renegade. He would be trolling the night, searching out new allies, new lairs, new minions.

About twenty blocks ahead, near an alley, a faint light shimmered like white bone through muddy water. Azriel eased through the mortals around him, carefully avoiding their touch. If he brushed against them and they felt the Hunter urge rising in him, it would frighten them. Their fear would draw the Renegade the way dead flesh drew carrion. Azriel had too much on the line to risk that. His left hand itched for his sword. A moment was all he’d need.

Brilliant white light intruded into his dark intentions for the Renegade, and with it came alien thoughts, strange ideas. Should he consider mercy? Was there any creature unworthy of forgiveness? Azriel gritted his teeth and said, “Get your healing ways out of my head, Raphael.”

“And allow you to bring trouble upon yourself?” a quiet voice said beside him.

Raphael, Archangel of Healing, appeared beside him, materializing onto the sidewalk as if he belonged there. In patched jeans faded almost to white and a denim shirt that had seen better days around World War II, Raphael was inches shorter, but tough and wiry. Azriel could never escape the feeling that in a fight, they would be equally matched. “Whatever trouble I get into is my business,” he said.

“Is that so?” Raphael’s face took on a puzzled expression. “I thought it was Michael’s concern as well.”

Raphael might go around the world healing mortals and doing whatever miracles he did from those statues, but with his own kind he was as ruthless as any warrior Azriel had ever gone up against. He stopped and leaned against a wall between a closed coffee shop and an open newsstand storefront, the kind that sold magazines married men hid deep in the closet.

Hooking his fingers through two belt loops in his jeans, Azriel stared at the sidewalk just to Raphael’s left. There wasn’t anything else to do. The Archangel outranked him. “This assignment isn’t from Michael,” he muttered.

“I see,” Raphael said, his voice as soft as if he’d asked about feathers shed from a wing. “Your commander hasn’t approved a new Hunt. So the White Council has given you their approval, then?”

“No.” Talking to Raphael was like talking to a lawyer. Short answers gave him less to work with.

“And so you’re out walking to take the evening air?”

“Very good.” Raphael smiled and brought his hands together like a teacher talking to a well behaved class. “Then shall we walk in the park, and enjoy the scents of night blooming flowers together?”

Azriel almost smiled back. He almost said yeah, flowers. That sounds good. Except the park was in the opposite direction of the Renegade’s trail. And the smiling Archangel with the diamond-hard blue eyes knew that. Azriel was sure of it. “I don’t have to go anywhere with you.”

“Then you won’t mind if I go with you?” Raphael made the question sound like a command.

“Splendid.” That radiant smile again, the one that could light up the far side of the moon. “Where shall we go first?”

Raphael had worn Azriel’s patience paper-thin. “Don’t ruin this for me,” he said. “He’s a Renegade. If I can bring him down, I have a chance with Zane.”

“What you have a chance for,” Raphael said, the smile gone as if it had never happened, “is a sentence to wander the Dark Realm eternally.” 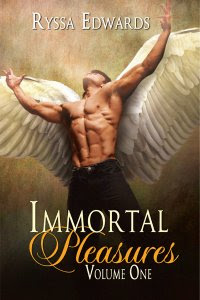 I’ll pick one lucky commenter and send out a signed copy of Immortal Pleasures, Volume I. Good luck!

You can find me here on the web:

I’m Ryssa Edwards and . . . thank you to the Paranormal Romantics for having me today!


Okay, Paranormal Romantics. Here's your chance to win a yummy signed copy of Immortal Pleasures. Leave a comment and I'll drop your name in the virtual hat. It's that simple. Hurry, your deadline is Friday, September 2nd at midnight. I'll announce the lucky winner Saturday before my post.

Good luck to all and have a fantastic weekend. May all you East-Coasters weather storm.

I love all kinds of paranormal but all time favorite is shifters and my favorite shifter is wolves. I love wolves and have a couple of wolf tattoos. My second favorite would vampires.
sstrode at scrtc dot com

First of all - the cover for Hunter Angel is stunning! I haven't read any of your books, yet and I don;t know how I've missed you because you write ust the type of stories I love.
i've become obsessed with many heros and heroines over the past 2 years of reading paranormal romance with vamps, shifters/urban fantasy with angels, demons - you name it! I can't really say I have a "favorite" but vamps and shifters are the top 2, ust like Sherry said. who can say no to a sexy, Alpha vamp or were? Not, I.
I hope I win!
MJB
msmjb65 AT gmail DOT com

@Sherry. . . I'm so chicken about getting tattoos, but I'd get a wolf if I saw one I really liked! Thanks for taking the time to comment.

Good luck to you both!

Wow! I saw those covers and my eyes went OO.