Please give a warm welcome to Karen McCullough!

Being Different in Paranormal

You wouldn’t think it would be hard to be different when writing paranormal stories, would you? After all, it’s a genre that theoretically lets you go anywhere and do anything your imagination can conjure.

Yet you look around, and it seems like every story you see has vampires and werewolves, with a dash of demons occasionally intruding. I love writing paranormal stories, but I’m not a big fan of vampires, werewolves, or demons as heroes (or heroines), though it seems like the public has an almost endless hunger for them.

Confession time: I have written one vampire novel, A VAMPIRE’S CHRISTMAS CAROL, which is currently being sold a part of the BENEATH A CHRISTMAS MOON anthology from Ellora’s Cave. It will be going out of print from them shortly and I’ll be releasing it myself as a stand-alone novella.

Ahem… That one novella aside, I don’t write stories with vampires or werewolves, but I have written a number of novels and novellas with paranormal elements. My earlier paranormal novels were romantic fantasy and the fantasy is pretty much classical type fantasy. Both of those novels are still available from ImaJinn books.

Recently, though, I’ve been trying to do some different things, trying out some lesser traveled paranormal paths.

My recently published novella, HEART OF THE NIGHT, which is part of the SHADOWED HEARTS series of Gothic romances, sponsored by the Gothic Romance Writers chapter (gothrom.net) and published by Red Rose Publishing, features a hero who is anything but a normal person. What he is would constitute a spoiler, but you could call him a sort of guardian from the past.

And a novel I’ll be releasing myself soon features a pair of wizards in a contemporary setting… Sort of an American Harry Potter and Hermione Granger, grown up, with college degrees well beyond what Hogwarts would confer (and, yes, that fact figures largely in the story).

My current work in progress features a witch and a gargoyle as detectives trying to solve the brutal murder of a group of younger gargoyles. I know there are a few gargoyle stories out there, but I don’t think it’s been done to death like vampires have.

What other paranormal creatures or situations haven’t been driven into the ground? 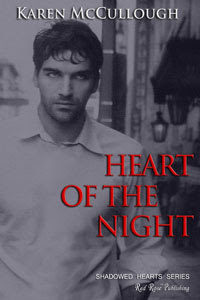 Coping with her father’s declining health isn’t the only challenge Jess O’Rourke faces as head of a small-town library. An old collection of books moldering in the basement may hold the secret to returning a demon to his own world. But that demon likes being where he is, and he’s recently learned the book’s location. He plans to retrieve it or destroy it, by whatever means necessary.
An enigmatic but attractive man who’s begun hanging around the library warns Jess about the book and the demon coming to get it. She’s dubious about the whole thing, but begins to search for the book. As the demon’s efforts to retrieve it escalate, Jess comes to realize that laying the demon may cost her more than just time and effort. It could claim everything she holds dear, even her own life.

Order it from Amazon.


Karen McCullough is the author of ten published novels in the mystery, romantic suspense, and fantasy genres and has won numerous awards, including an Eppie Award for fantasy. She’s also been a four-time Eppie finalist, and a finalist in the Prism, Dream Realm, Rising Star, Lories, Scarlett Letter, and Vixen Awards contests. Her short fiction has appeared in several anthologies and numerous small press publications in the fantasy, science fiction, and romance genres. Her most recent release is a cozy mystery, A GIFT FOR MURDER, published in hardcover by Five Star/Gale Group Mysteries. She invites visitors to check out her home on the web at http://www.kmccullough.com.
Posted by Stacey Kennedy at 7:00 AM

I feel you girlfriend. In my Familial Witch series I have an Eternal, Vampire, Enchantresses, mermaids, gods and goddesses. A variety of beings. But the vampires play minor rolls.

I also have a fantasy/paranormal crossover where there is a power involved set in contemporary time. It was so fun but hard to create these worlds.

Thanks, Bri. Yours sound very intriguing too.