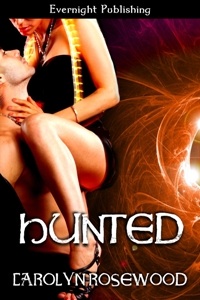 Hunted sounds like a fab book. Love the angels vs demons romance ;) Especially for the forbidden thrill :)

Thanks for the giveaway. Count me in. judimello AT gmail DOT com

I've heard nothing but good things about this book, I would love to win it :)

I would love to have this book. Great blog today!
rebecca@rebeccaroyce.com

Hi there,
The excerpt was hot. Would love to read more.

But first a question:
Where do you get your inspiration from?

Wow, this looks like a yummy read. Which book of yours should I start with? And why fallen angels and such?

Thanks so much for having me here today! :)

Heather, how sweet! Thanks so much! :)

Victoria, HUNTED is a stand-alone, but you'll meet Faina and Jace in it. and they're the hero and heroine of THE LAST SOUL, so I hope you'll check that one out as well. :)

Emma, I've always been fascinated by angels and demons. It seemed natural to write a series where they walk among us, disguised as humans. :)

Hi Laurie, all three books (REDEMPTION should be released this fall!) are stand-alone, so you can start with this one or THE LAST SOUL, book 1. The hero and heroine of TLS make an appearance in HUNTED and in REDEMPTION. In addition, Jahi and Dagon from HUNTED will be in REDEMPTION. :)

Carolyn, would love to read this book! Still on med leave so I can't buy. To win a copy would be fantastic!

My question is, do you get any say in choosing the cover?

Hi poisnivyred, Evernight sends a form that asks the author to fill out as much information as she/he likes about the characters, their looks, how they dress, their personalities, etc. Also on that form is a place to list anything significant in the book we would like reflected on the cover. Dara England designed this, as well as my cover for THE LAST SOUL, and she nailed my characters. I absolutely love the covers! :)

Hello, Carol! I would love to win a copy of Hunted!
My question is, which couple in the series is your favorite? And why?

Hot cover! Loved the excerpt; I hope I win; I'd love to read Hunted!
Mara
msmjb65 AT gmail DOT com

Hi Adonis, I'm really enjoying writing Redemption. I have to say it's my favorite in the series so far. :)

This giveaway is closed. Thanks to all who participated!

Laurie is the winner!

Congrats, Laurie!! Your copy of HUNTED is on the way! :)