Being a published author, the question I get asked most from aspiring writers is, "How many times did you get rejected before you were published?" My answer is usually, "Too many to count."
But, if I think about it, I could put a number on it—approximately fifty. Ouch. Just thinking about that stings a bit. Will it be like that for every author? I honestly have no idea.
But I went about it all wrong. After I wrote my first novel, I had these grand delusions that I'd get a big-name New York agent, get signed at a huge publishing house, and have a best seller within a few months. Don't we all wish that? My story was too good to not be a best seller. Uh-huh.
I'd taken writing classes. I'd perused countless websites on how to get published. But I completely ignored the advice that—in most cases—the first book you write isn't the first one that gets published. So, I sent out my queries and such to all these agents, and I got nothing. Out of the thirty-odd agents I queried, maybe 3 asked for sample chapters. And those weren't interested after they read them. Most of the agents weren't interested from the start.
But, did I give up? Hell, no! So my first book wasn't ready to be published. I could live with that. The second novel would be the one. I tried the same avenue again. More agents were interested in sample chapters this time, but I still couldn't find anyone to take a chance on me, the inexperienced, unpublished author.
I was still in love with writing. And, I was in the process of sending out my second novel when I started taking a short story class. Then, I came across a contest for erotic romance short stories that contained demons or witches.
I was so stoked! The story I was writing for my class was about a half-demon demon hunter. It was a perfect fit! I sent it in to Breathless Press, and a few days later, they contacted me. I'd won! Sweet Release was to be published that October.
It took a while for it to sink in. After rejection upon rejection, I had to read the email at least six times before I believed it was true. I was getting published! And it was the first place I'd sent the story. I didn't have to go through tons of "thanks, but no thanks" emails this time.
I had another full-length novel published the following April, and a new one will be out in October of this year. I got my break, and now I'm on a roll. J
So, my advice to any aspiring author would be, "Don't give up." Remember that one rejection is just that—it's one person's opinion. If you get thirty no's, you might consider working on another project or revamping the one that keeps getting rejected. Otherwise, just keep trying. Persistence pays! 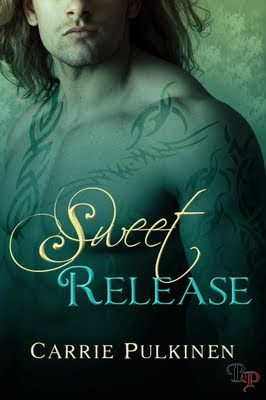 The day Miranda Billings dies isn't the worst day of her life, but it's close. Miranda dreams of adventure and escaping her boring existence, but death might be too much of an escape. But with the help of Andre the demon slayer, she discovers the adventure she craves and ignites the passion within her heart.
When Andre, the half-demon EMT, finds the woman he loves crushed by a bus, he reawakens her soul with his magic and his blood.  Now, Andre must decide if he’s willing to let her join him in his perilous quest to slay demons and save humans. He almost lost her once. Is he willing to risk losing her forever?
Carrie's Blog

Carrie Pulkinen is giving away a copy of Sweet Release! To be entered in the drawing please leave a comment or a question for our generous guest. DON'T forget to leave your e-mail address. I can't contact you without one. LOL Winner will be announced tomorrow.
Posted by Annie Nicholas at 12:09 AM

thx for the interesting interview. I'd love to win the book!
Mara
marajbrandon AT gmail DOT com

Yep rejections suck but you are right...one must persevere if you want to get published. I know from experience :)
Hope to win your book...it sounds very interesting!
Brenda
dragynheart@sbcglobal.net

I continue to be grateful my first "training wheels" novel was rejected. It richly deserves the obscurity it enjoys, languishing with the dust bunnies under my bed!

I'm glad it all worked out Carrie! I've read your To Catch a Spirit and thought it was fantastic.. Sweet Release sounds like a great story too!

Oh, my, that is a rather devilishly delightful cover. My first novel was rejected a total of 67 times before I found a publisher. I rack up those rejections nowadays when I decide to try the agent mill. It's become a game really. I'm not convinced I'm ready for an agent yet.

I get asked that all the time, too. I love your response and good for you for pushing through.

I've been rejected...a lot, and now I'm scared to let mey current WIP fly for fear of another round.

I need the magic courage potion and then I need to let if fly.

Congrats to Nerine Dorman for winning!

Thank you Ms Pulkinen for joining us this week.